After reading several forums with people arguing about what routers should be configured with the "ip pim autorp listener" command, I have decided to write this post explaining things in my own way (of course, with a lot of pictures, as usual).
Before starting, just a few words about Auto-RP: it's a legacy Cisco proprietary method for selecting the RP that uses two functional roles: the Candidate RPs (C-RP) and the Mapping Agent (MA).

Auto-RP uses, in fact, for distributing the announces and discoveries. For this:

Configuring "ip pim sparse-mode" on all 4 routers will automatically install a on all of them ( at least in IOS 12.4 - not tested in other IOSes !!! )

Configure R1 to be a Candidate-RP: "ip pim send-rp-announce Lo 0"

=> R1 announce itself as candidate RP via in a DENSE-mode fashion (to all its neighbors): 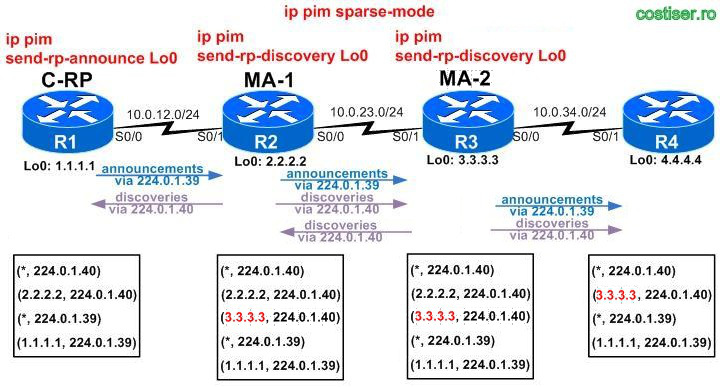 At this moment, all 4 routers know the RP via Auto-RP with the following observations:

Important to remember
I did use the "ip pim autorp listener" command on any of the 4 routers !!!
I only took advantage of the fact that the C-RPs and MAs are directly connected to all other routers and they forward the information for 224.0.1.39 & 224.0.1.40 in a DENSE fashion.

If a 5th router had been connected to R4, then in order for R5 to receive the Auto-RP messages we would have needed to configure "ip pim autorp listener" on R4 !

Recommendation: against above conclusion, , especially during CCIE lab exam!