Welcome back to a new article about SDN - this time introducing an OpenFlow controller called Faucet, developed as a RYU application by New Zeeland Research and Education (REANNZ), Waikato University and Victoria University. In this article, I am not going to write about Faucet's architecture and features since you can read about it on its github page and here or here. Instead, I will describe the setup used for a demo presented at the Irish Network Operators Group 11th meetup (iNOG::B).

Let me start by saying that, unfortunately, the SDN term has lately become more of a buzz word especially due to the all the presentations and campaigns that incorrectly use (in my opinion) the word SDN, prepared by vendors that try to show off their products but that are mostly oriented onto orchestration and automation.

Yes, I had this debate with a lot of people - - and I've been called an SDN puritan because, in my opinion, SDN is all about - this is the SDN's first principle and all advantages and flexibility come from it.

Please note that throughout all my SDN related articles, I hold on to this statement: SDN means !

What is the target of this demo ?

The purpose of this demo/article is to present few things that could be achieved with an OpenFlow controller such as Faucet:

Note that I intend to have separate articles about Faucet's multi-table architecture and other features!

Faucet is an open source OpenFlow 1.3 controller, based on RYU framework (so written in Python), with features such as:

You can get full list of features here - note that new features are constantly added!

As with any good piece of software, Faucet follows Python style guides (PEP8) and contains a comprehensive list of tests that could run against both physical and virtual network topologies.

There are already several vendors that support it - Allied Telesis, NoviFlow, HP Enterprise/Aruba, Zodiac FX - and, of course, you can test it with software switches such as Open vSwitch or Lagopus.

This setup was created for a demo presented at the Irish Network Operators Group 11th meetup (iNOG::B).

For this demo I have prepared the following devices: 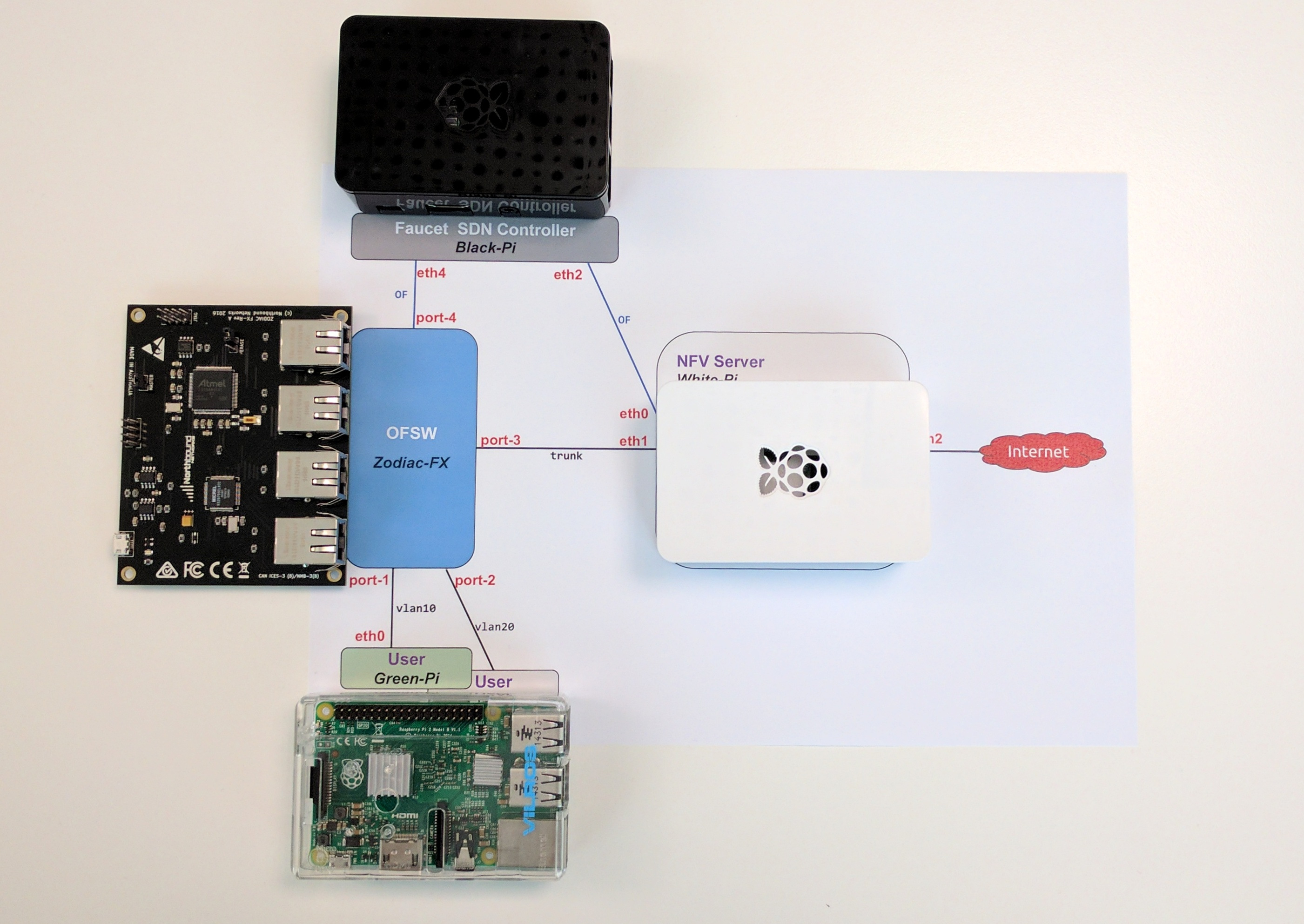 The final topology of the setup looks like this: 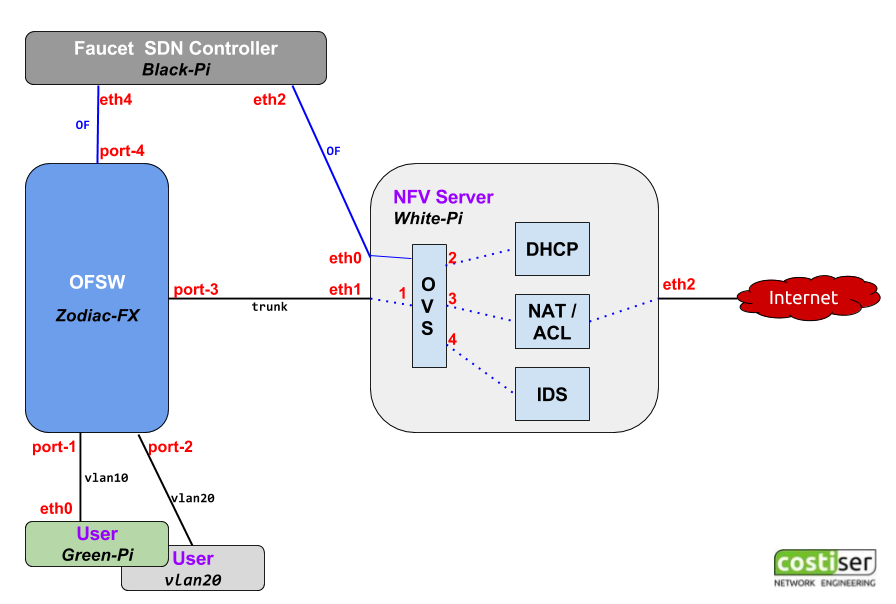 The target is to achieve the following:

Probably the most complex element of this demo is the implementation of the NFV. The target is to perform the following Network Functions each inside its own isolated container:

All of these functions run inside network namespaces that provides isolation between them. The connectivity is achieved by creating an OVS switch that is also managed by the external Faucet controller. It is clear that by doing this you have a central location for controlling both physical and logical switches and thus making sure that all of them adhere to the same network and/or security policies.

In order to connect the namespaces to the OVS software switch, we use Virtual Ethernet pipes (veth).
Physical interface eth2, that connects to the outside world, is moved into the NAT NFV in order to provide Internet connectivity to the test users. (Note that during demo I may have used the wireless wlan0 to provide internet access to the setup!)

The Raspberry Pi's used for this demo run Ubuntu Mate. The main reason I opted for Ubuntu Mate versus Raspbian is the predictable interface naming, which was an important factor considering that I used a lot of USB adaptors to get more network connections on the Pi's. Make sure you run sudo apt-get update; sudo apt-get upgrade before installing further packages.

The procedure to install Faucet - the dark gray box in the diagram or the black case Raspberry Pi in the picture - is very very simple:

Small preparation and you are good to go:

Use pip show ryu-faucet to see the Faucet's location and then invoke ryu-manager (remember, Faucet is a Ryu Application):

Additionally (optional but you may want to do this), you can follow these instructions to install Faucet as a service.

Now that we have Faucet working, let's adjust its configuration file /etc/ryu/faucet/faucet.yaml for this setup:

Note that dp_id needs to be adjusted to match your Zodiac's DPID.

As you can see above, ACL 99 catches all DHCP traffic and sends it towards DHCP NFV (first rule) and then it does port-mirroring by sending a copy of all traffic seen on the port it is applied to the IDS on port 4. Same for ACL 98, it mirros return traffic from the internet onto IDS port-4.

Here is a brief description of how the traffic should work:

As already mentioned above, each distinct network function will run inside a network namespace. This article may give you more information about namespaces and veth interfaces and how to set them up. For this demo you don't have to do any of that because I made a bash script that creates all the namespaces, the veth interfaces and the connectivity between them:

As you see in the above script, I rely on ifup/ifdown scripts to configure some of the interfaces. For this to work, I have configured the /etc/network/interfaces file like this:

On the DHCP NFV, I run dnsmasq as a dhcp/dns server (sudo apt-get install dnsmasq to install it) and below is the basic configuration (file /etc/dnsmasq.conf):

Putting it all together

At this moment, connecting everything as per the diagram above should allow the test user to get an IPv4 address (with default gateway and dns server information) and to connect to the internet.

Some troubleshooting is expected so jump to the end of this article to see how you can verify your setup.

Not everybody has the devices needed for this setup... but you can create everything on a Linux box using namespaces, veth, OVS, etc. Or you can use Mininet that does all this for you. Follow the procedure below - it should take you less than one hour to have everything working.

In order to be consistent (and avoid problems due to differences between package versions, etc), I suggest you create a vagrant box running Ubuntu 16.04 (details were already provided in a previous post) then make sure that you update your new virtual box.

To make Faucet work you need to create the location for the logs sudo mkdir -p /var/log/ryu/faucet/ and then create its config file vi /etc/ryu/faucet/faucet.yaml - copy/paste the configuration presented in the Faucet section above.

You have the option of running it from command line or create the necessary scripts to make it run as a service (instructions here).

dnsmasq should already be installed (as part of step 2) so you only have to adjust its config file /etc/dnsmasq.conf to match the demo (see NFV Section above)

Last step is to run a Mininet topology that creates all the devices as per the diagram shown at the top of this article. I already prepared this mininet file and shared it via github:

Additionally, I am copying Mininet's m utility from here but I change the penultimate line to this:
cmd="exec sudo TERM=xterm-color debian_chroot=$host mnexec $cg -a $pid $cmd"

So you should have these files in the same folder - you must run all these commands with :

To run the setup use sudo ./mininet_faucet_demo.py

Then you use m utility to connect to Mininet nodes in order to run troubleshooting commands inside each node:

This section is common to both physical setup (using the Zodiac FX switch) and to the virtualized setup (where all devices are emulated with Mininet). Troubleshooting is the most important part as it will help you understand better how all things work together. Since this article is already too long, I'm only listing the commands used to troubleshoot with the promise that I will explain each of them in a future article.

As always, thank you for your interest and comments! Good luck with your setup!