This post represents the solution and explanation for quiz-2.
Have a look at the quiz and try solving it before reading this post.

I will start this article with one of the most important rule in OSPF regarding the best path selection: for the same prefix, OSPF uses the following order:

But in our case, the AD is same (110) for both internal OSPF Pid 1 and external OSPF Pid 2... so, it comes down to a race condition: whatever route is learned first it will be inserted into the routing table.

Now, the above process occurs also on R2, not only on R1... So, what happens if the OSPF database exchange with R3 takes longer on R1 (comparing to R2). All this results in suboptimal routing on R1 (or R2) seen here:

How could we solve this? Well, remember where the problem started in the first place: comparing the AD of internal OSPF Pid-1 with the AD of external OSPF Pid-2. To solve this problem there are more options, but let's start by configuring both OSPF processes to have a higher AD for external routes: 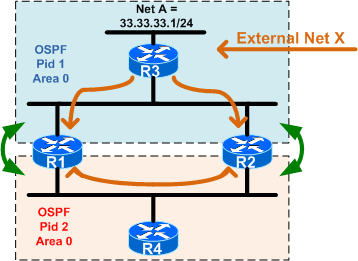 This solves the initial problem, but introduces the same situation for any external prefixes learned via either OSPF Pid 1 or OSPF Pid 2 => those prefixes may be reached via suboptimal path or may loop indefinetely (see in the above picture the External Net X learned via OSPF Pid 1)

The solution to the new problem could be to configure different AD for the OSPF processes: 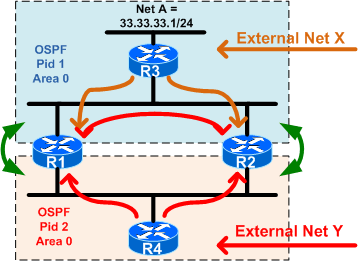 In the end, the solution will be to combine setting the administrative distance with a filtering method. You have you match the prefixes from one domain (with an ACL or a tag) and keep them from being re-advertised into the domain they originated from.
Let's see the solutions in detail:

Using the above configuration, you configure ACLs matching all prefixes originated or learned in each OSPF process:

Variant solution 1.1: instead of setting the AD for all external prefixes, you may opt to set the AD to prefixes identified by ACLs with command

Solution 2: filtering based on route tags

During the redistribution, you can set tags so all . Later, on the remote routers (second redistribution point), you will filter those prefixes based on tags.

Depending on whether the redistributed routing domains have the same AD (as in our case) or different (let's say: OSPF and EIGRP), you may need to perform filtering while installing/accepting the tagged prefixes in the routing table OR you may perform the filtering of the tagged prefixes while performing a new redistribution (back into the original domain).

Filtering the tagged routes while installing into the routing table works in all situations because if a route is not installed in the routing table, it will also not be redistributed back into the original domain=> hence you'll not create a routing loop. 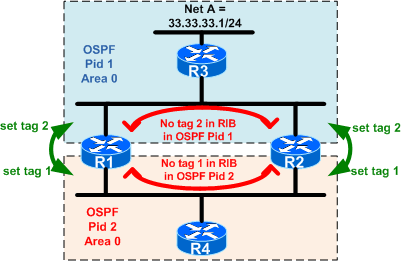 A variant solution is to perform the filtering during the redistribution () instead of using distribute-list.

Solution 3: Filter redistributed prefixes with a AD of 255

Again, same as the previous solution, this one also has the drawbacks of maintaining ACLs for each routing domain plus the fact that (because they don't accept each other's prefixes).

As always, posts about OSPF are veeery long, but hopefully useful.
Thanks for your comments on the initial quiz.