How Can MSTP Configuration Changes Impact Your Network

This post represents the solution and explanation for quiz-19.
Have a look at it to understand the problem.

This quiz talks about making configuration changes to the MSTP by modifying the vlan to instance mapping. There are 4 switches (Dist-1, Dist-2, Acc-1 and Acc-2), all configured to run MSTP with one region:

At this moment, the network engineer on all switches, in this order: Acc-1 --> Acc-2 --> Dist-1 --> Dist-2 which causes some sensitive applications (connected to Acc-1 and Acc-2) to experience short network cuts, alerting the server team.

Before explaining why this happens, let's review some of the characteristics of MSTP:

If any of the above (configuration name, revision number or vlan-to-instance mapping) is different, the switches will be in !

Usually you configure a single MSTP Region for your network. Of course, there might be cases when more regions would make more sense, but these are corner cases.

In case that exist, you have to remember the following :

As soon as the junion engineer changes the vlan-to-instance mapping (by moving vlan 200 to instance 2), because the hash of the vlan-to-instance mapping will be different. This will trigger some links to become boundary ports and to transition from FWD to BLK or vice-versa.
The next diagram shows how the ports' state will change for vlans in instance 2 / MST 2, as the engineer made the configuration touching the switching in this order Acc-1 --> Acc-2 --> Dist-1 --> Dist-2:

A continuous ping between two hosts in vlan 150 (mapped to MST2), connected to Acc-1 and Acc-2 respectively, shows that connectivity is lost during re-convergence. The time of impact could be different depending on whether the portfast/edge feature is configured or not on the ports connected to the hosts:

For the first time since writing quizzes on this website, !! It is not possible to change the vlan-to-instance mapping on all 4 switches without causing at least a short network cut !
The only way to do such configuration changes to the MSTP in production environments is by scheduling a maintenance window approved by all teams impacted.
Of course, not all MST instances are impacted the same: for example, after reconvergence some interfaces could maintain the same status (BLK or FWD) for some instances/vlans but not for other ones.

My point of view is: in networks like the one in diagram with MSTP between Access Layer and Aggregation Layer, you can count how many possible ways/paths exist between the Access Layer and Aggregation Layer (usually equal to the number of uplinks) - and this case (and most of the cases) this number is 2: from access switches to aggregation there are only two uplinks / paths. In this case, with two MST instances you cover all situations. As a result, you map half of the vlans to instance 1 and the other half to instance 2, so that you will never have to change the mapping again.
Remember that it is always a good practice with MSTP to avoid leaving vlans in IST / MST 0 instance (more about this in future quizzes/posts.

In the end of this article, I'm attaching another diagram with the states for vlan 200 (the one that is newly added into production). During the process, this vlan 200 will be mapped to IST / MST 0 in some regions and to MST 2 in others. As you can see from this diagram, the impact on vlan 200 is much less than for vlans 100-199 (MST 2) shown above - this is because most of the times, the same interfaces remain blocked: 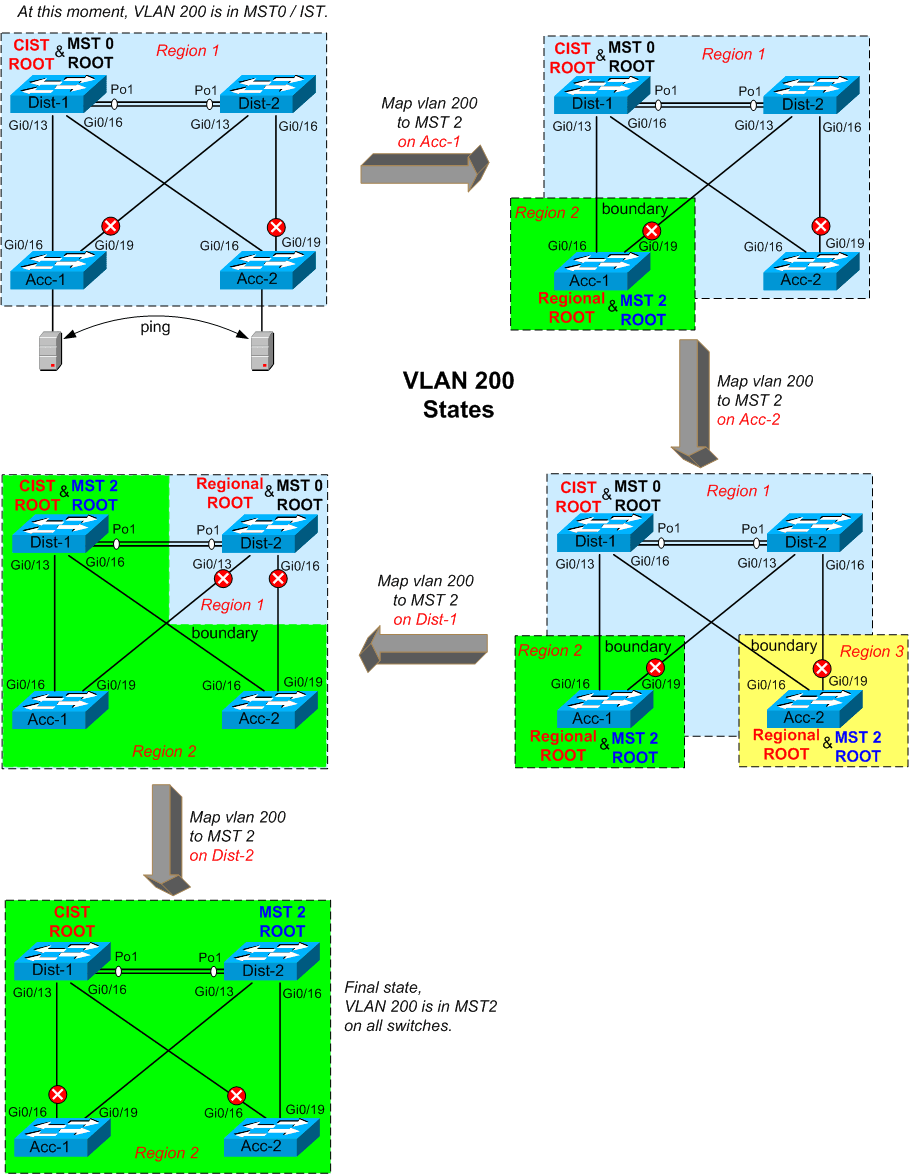 Thank you for your comments into the quiz !
Subscribe to this blog to get more interesting quizzes and detailed solutions.