Welcome to a new series of articles that will be structured as lessons with the target of bringing SDN closer to everyone's understanding.
Each article will present a topic plus one or more exercises that will show that topic in action. The lessons will wrap up with some questions asking the readers to exercise on their own and provide the answers. As you see, the approach is pretty similar to the networking quizzes, but with SDN ones, I also make an introduction to the topic since all this is relatively new.

When I started my personal SDN journey, it was difficult to find a place to start, so I began reading articles, viewing presentations or listening to different videos, all trying to demonstrate (mostly theoretically) the advantages, the applications or limitations of this new technology.
I am a person who learns best by "doing", by individual testing, so I have decided to start these articles in order to help other network engineers with their beginnings in SDN.

In parallel, I will continue my series of network quizzes and solutions, hoping that time will allow me to do so...

Having started treating SDN topics clearly shows that I believe in this new approach in networking and after reading some introductory presentations and papers, one of the arguments that convinced me, was an analogy to the computer industry evolution from vertically integrated, closed, proprietary, relatively slow innovation, specialized-hardware, specialized-feature systems to horizontal, open interface, rapid innovation networking technology:

[1] Taken from Nick McKeown's presentation "How SDN will shape networking"

What is Software Defined Networking (SDN)?

SDN (Software Defined Networking) is a network architecture that breaks the vertical integration by separating the control logic (control plane) from the underlying routers and switches that will become simple forwarding elements (data plane). The four pillars to remember about SDN are: [2]

In order to put all the theory into practice, we will use Mininet, a virtual network environment that runs on a single machine and provides many of the OpenFlow features built-in. Mininet will emulate an entire network of switches, virtual hosts (running standard Linux software), the links between them and, optionally, a SDN controller (I will talk in details about the SDN controller and OpenFlow in future articles).

The switches generated with Mininet will be just simple forwarding devices, without any "brain" of their own (no control plane). The new networking paradigm with SDN is: control plane is separated from the data plane so such switches will only do what they are instructed by an external controller. Whenever a switch (or a forwarding device, generally speaking) does not know how to deal with some packets, it will simply send them to the controller (or contact the controller referrencing some buffer-ids - more on this later on).

Mininet supports research, development, learning, prototyping, testing, debugging, and any other tasks that could benefit from having a complete experimental network on a laptop or other PC.[3]
This may require a little bit of programming knowledge (Python), but you can also get it along the way...

The installation of Mininet is pretty straight forward - in summary:

The default run of Mininet sudo mn will create a topology consisting of one controller (c0), one switch (s1) and two hosts (h1 and h2).

To help you start up, here are the most important options for running Mininet:

For our exercise, we will create a virtual network with one switch and 3 hosts, using the command shown below: 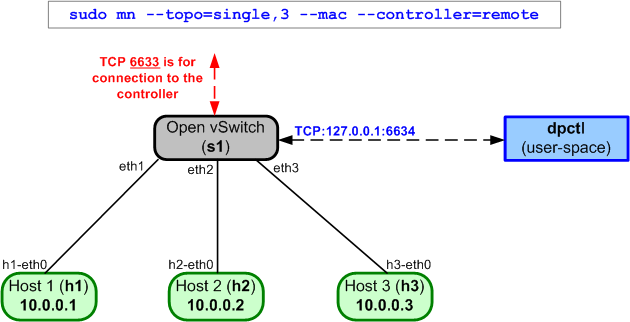 For the moment, we will not touch the topic of SDN controller so our test network will have no controller. For such a switch to be able to forward traffic, it needs to be told how to handle the flows (again a topic for future articles).
In order to "control" the switch (to add and view the status of the flows on the switch) we will use an utility called DPCTL that allows direct control and visibility over switch's flow table without the need to add debugging code to the controller. Most OpenFlow switches have a passive listening port running on TCP 6634 (by default) that can be used to poll flows and counters or to manually insert flow entries.

Do not confuse the dpctl with a controller (it's not the same thing) - dpctl is just a management/monitoring utility!

You can use this utility directly under the mininet prompt or in a separate console by connecting to the listening port as indicated below:
dpctl COMMAND tcp:127.0.0.1:6634 OPTIONS
where COMMAND can be:

As you can see, we receive this message: "Unable to contact the remote controller at 127.0.0.1:6633". This is because, for the time being, we are going to use mininet without any controller (cli argument --controller=remote tells mininet that we are going to use an external controller, but for this lesson, we don't need it).
In order to double-check that everything started correctly, use the following mininet commands:

STEP 2: Open terminals for each host and run tcpdump on each:
Attention: for Windows users, make sure you installed & run Xming, plus you enabled X-forwarding in your ssh session to the Mininet VM!

The first exercise in the SDN series will use the above setup, but with the additional requirement of treating ARP traffic as broadcast:

What are the relevant commands to achieve this?[4]
Post your answer in the 'Comments' section below and subscribe to this blog to get more interesting SDN lessons and quizzes.

: if this is the first time you worked with Mininet, now would be a good time to do the Mininet Walkthrough !

After completing this exercise, you should be able to see this:

Thanks again for all your comments !