Over the next few articles, I will write about OpenFlow, Open vSwitch and other SDN related topics. As always, I'm combining the theory part with some hands-on practice and for this, I put this article together describing one way of building such a testing environment.

In the subsequent SDN articles, I want to focus on the topic being discussed and not on how to build the lab and this is the reason of writing this post.

Among other things, SDN means flexibility - as such, there are multiple ways of creating your own SDN lab, some more simpler than others, depending on your skills. At the heart of an SDN testbed is virtualization - you virtualize almost everything: hosts, network links, switches, routers, etc... Most of the virtualization techniques are based on linux - for example: isolation using namespaces (especially network namespaces), linux bridging, virtual ethernet pairs (veth), OS-level virtualization vs. lightweight containers - all these are topics that will help you get the full picture. I won't spend time explaining them since there are plenty of resources out there on the big wide web.

Note:
By far, the simplest way to get yourself an SDN lab is to download Mininet VM image. You may as well follow their Mininet Walkthrough if you hadn't done that already !

Again, I want to emphasize that this is just an example of a lab, just one way of testing ! There are many other ways to achieve the same things - using LXC, QEMU, KVM, just to name a few. I'm not going to reason why I use this instead of something else - it all comes down to your personal preference.

If you already have your favorite virtual environment and you are interested only in the OVS testbed, then please jump directly to Open vSwitch Setup section.

Here is a list of the components used to build the lab environment:

Please follow the links above to install VirtualBox and Vagrant.

Once you have downloaded and installed VirtualBox, let's create a couple of Host-Only network adapters. To do so, open , then navigate to -> and add:

We are going to use Vagrant in order to manage the VirtualBox VMs. The Operating System of the VMs will be the latest LTS version of Ubuntu (currently, Xenial - 16.04) - this is how we tell vagrant to add such a box to its inventory:
vagrant box add ubuntu/xenial64.
Personally I keep all my vagrant boxes in a folder called vagrantwork: mkdir -p ~/vagrantwork.

After this point, the workflow is pretty standard - :

Read more about Vagrant on their documentation page. Some other very useful vagrant commands:

Here you also have the option of going the easy way by installing Mininet and everything that comes with it (I recommend installing from sources) - :

Or, another simple option is to install the Ubuntu packages ( ): sudo apt-get install openvswitch-switch openvswitch-common

But, if you want to have an identical setup with mine (in case you want to recreate the labs that I'm going to present in future posts), then, - it may seem complicated, but you'll learn something new ! In summary, target is to install the latest Linux kernel version and the latest version of Open vSwitch, because these are the ones that contains a lot of interesting features.

Lately, my tests required me to compile the kernel from sources and although the process is not as painful as it once (read 10 year ago) was, it was still time consuming and error prone. I found that installing the kernel using .deb packages from the , is a much straight forward process. This is how it is done:

Let's test that everything is ok (of course, your version may be higher than the one displayed below, since you are installing the latest stuff):

Again, using Mininet is, for sure, the easy option to create a testbed. Run sudo mn and you'll get the default OVS switch with two hosts connected to it.

Instead, I will manually create each element - thus learning some new stuff that will help later on ! Below is the diagram showing the target that we want to reach: 2 hosts connected via veth pairs to an OVS switch. 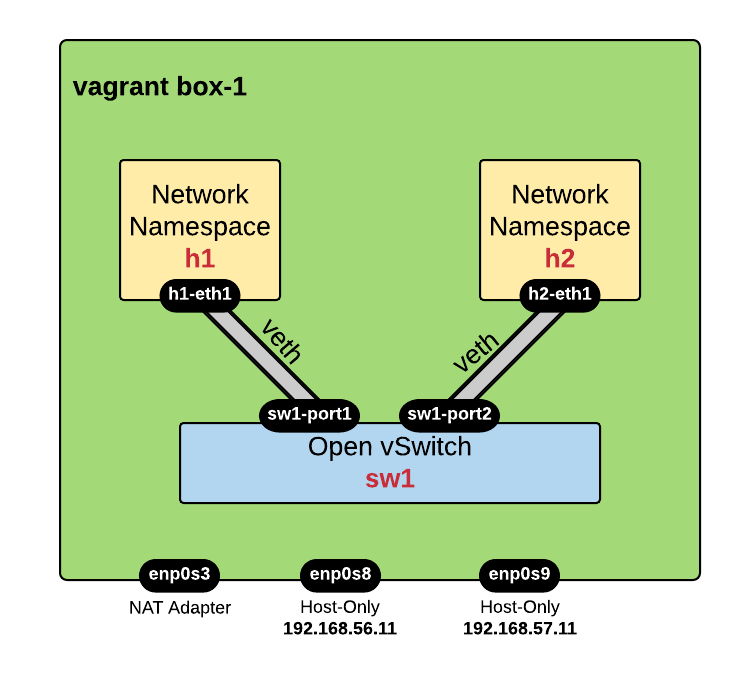 We will use network namespaces in order to simulate hosts:

We will need to create veth links in order to achieve network connectivity:

By default all these veth interfaces are in DOWN state and un-configured. Since one end is assigned to the network namespace, all the configuration commands need to be executed inside the namespace with command sudo ip netns exec <host> <command>.

The other end of the veth pair, that is connected to the virtual switch, just needs to be brought up - using standard linux commands:

At this moment you should have a working lab environment with connectivity between h1 () and h2 () namespaces:

You may ask
The answer is: the default behaviour of the OVS switch is that of a traditional layer 2 switch. You can see this by inspecting the flow table with ovs-ofctl dump-flows command:

By default, there is this single flow that has no match fields (so basically it matches everything) and action = NORMAL which means that it uses the traditional non-OpenFlow Layer 2 switching.

If you have got this far but for some reason the two hosts cannot ping each other, you can follow these trobleshooting steps to check what's wrong:

As I like to say, this environment is the "" because you can capture traffic at any point you want. Use the commands in the diagram below to perfom tcpdump in different parts of your network. 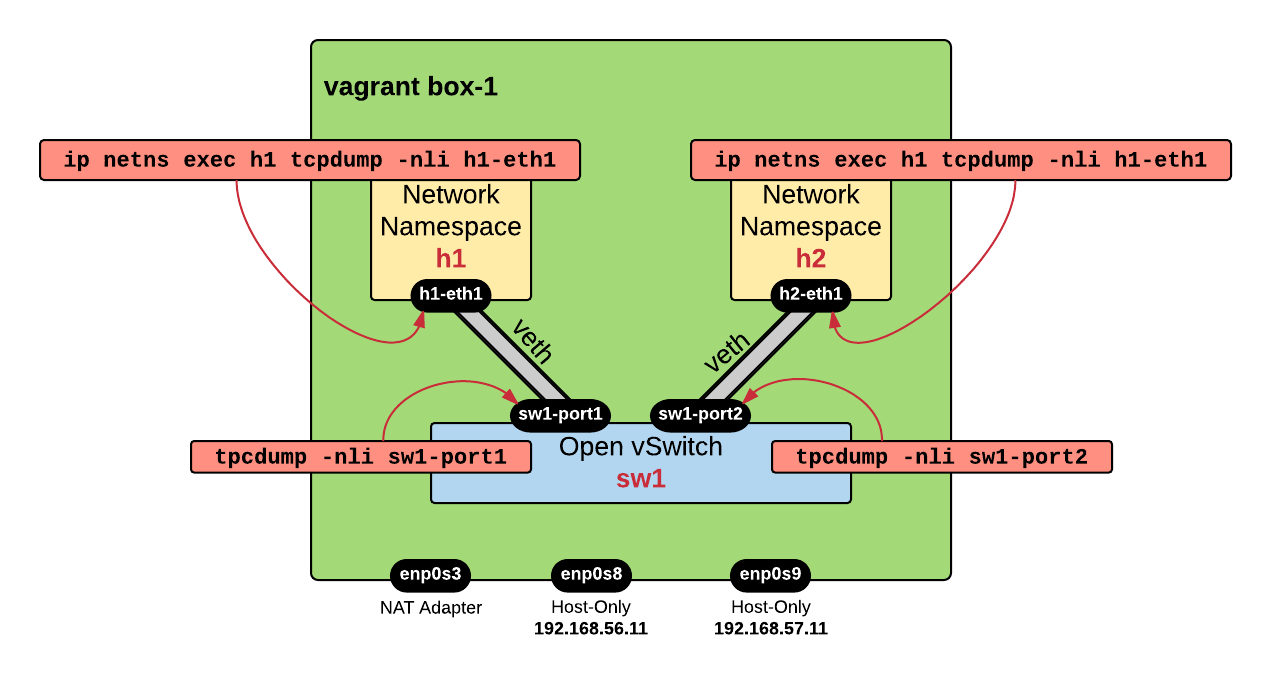 You may need to open multiple windows - in the first window you leave a continuous ping running on h1 (sudo ip netns exec h1 ping 10.0.0.2) and in the other windows you perform packet capture. You should see traffic leaving h-eth1, reaching sw1-port1, then outgoing on sw1-port2 and finally reaching h2-eth1.

Here is an example of capture performed on sw1-port1:

Please note that some of the configuration (network namespaces - netns - and virtual ethernet - veth) upon reboot of your vagrant box. If you want to keep them, you need to add all these commands into the file!
The OVS sw1 configuration will survive the reboot since it is stored in the OVSDB server !

Now you are ready to start some SDN labs. I'll post them soon.